“In a vibrant energy that creeps between pure lines and barely perceivable images, each composition goes beyond an apparent abstraction of concepts: all Sobti’s paintings offer a psychological reprocessing that struggles to capture the meaning of existence. Opaque reflections of a subconscious absorbed in a deep meditation. An intense mirror in which we find ourselves, as long as the dreams that the artist fixed in a veiled symbolism onto the canvases.”

Deepa Khanna Sobti is an prodigiously talented abstract expressionist artist whose depth of interpretation of reality is outstanding, and is expressed in both her art and her writing.

Deepa paints solely with a palette knife to give her paintings a more spontaneous and gestural feel that reminds us of the typically intuitive and emotional characteristics of Action Art, brought to the scenes by Jackson Pollock and Franz Kline, where art is an act rather than an object, a process rather than a product that touches the collective sense of an archetypal visual language.

The irregular patches of colour in her art works create a lyrical image, like a mosaic of flickering light. The densely layered paint is applied on the canvas and the palette knife creates intense areas of vivid colour which are pure explosions of wonder that remind us of the Art Informel movement and Jean-Paul Riopelle in particular.

Sobti’s compositions are powerful, meaningful, a symphony of flaming colours with a unique taste for harmony and balance. Her paintings are a never ending journey from light to darkness and back; they vibrate like a symphony that generates substantiality and strength. They are a jubilation of pure emotion that overwhelm the viewer, captures his soul and brings him back to the real world; a world in which the meaning of nature and life are in unison with the power of the universe.

As Deepa herself says in one of her poems: “In one thought, this emptiness contains the entire universe”, and she shares both with us so wonderfully and with such beauty that all we feel is the desire to live that universe. Sobti is an artist that leaves a mark in our consciousness and will surely have a deep impact on the contemporary art scene of today and tomorrow.

Deepa Khanna Sobti’s artworks exhale a forceful and inexhaustible inner strength that seems quietly enclosed between the layers of the pictorial substrate. If and only a touch of pure hue, a wide stroke, a scratch of paint or a soft line weave. The canvases on which this Singaporean artist creates transformed into simply pure painting, the genuine one.

A dynamic presence vibrates under the surface, like a soul trapped in the interweaving of the canvas texture. The subconscious of the viewer is captured by the almost supernatural placidity conveyed by Sobti’s smooth gestures: she entrusts her own creative impetus to a palette knife, the perfect tool to express and to reveal the most intimate aesthetic instincts through her captivating application of colour.

Sobti thus leaves the restricted boundaries of the brushstroke behind. At a first glance, Sobti’s works communicate the same divergent emotions felt in admiring the vault of heaven. The mastery we immediately perceive in her calibrated overlapping layers of hues engenders an effect on the canvas, similar to what the weather phenomena do over the horizon.

From all the particular tones of an intense sunset and the sweet nuances of a spring dawn, to the shadowy appearances of a nebulous autumn sky, the paint fluctuates on the artworks in a constant metamorphosis of enthralling blends.

In contemplating these deeply intellectual surfaces, we breathe a dynamic surrounding that not only reminds us of the temporary status of the atmosphere, but we also perceive a connexion with our intimate self.

In fact, the suave shades of powerful tones have the appearance of the unceasing variations that define our existence: the alternating inclinations and the subjective mood changes that effuse one after the other in the continuous progression of our lives.
Sublime Enchantment Beyond Existence
Karen Lappon
International Confederation of Art Critics

Abstract expressionism and depth of meaning are the characteristics of Deepa Khanna Sobti’s art.

Nature is the main source of her inspiration due to the erosion and corrosion of material surfaces that, when perceived and understood, create an abstraction in themselves, a narrative of the world beyond our human experience.

Deepa’s work is permeated of all that feeling that unconditionally connect us to the world around us: a natural instinct of belonging to Earth, a reference to the more esoteric truth of Nature and to the history of creation. Deepa’s creative hand seems to retrace the primordial energy of the Circle of Life, in all its inscrutable complexity.

Deepa refuses the paintbrush, considering it a limiting and imposing tool that coerces the hand to paint with known and routine gestures that derive from the conscious mind. Therefore, she chose to adopt the palette knife, which gives her a freedom of motion and action that drives her towards emotional and liberating forms of expression.
In fact, Deepa never begins a painting from a predetermined subject but works her way through it with a completely uncritical and thought free attitude, until her eyes and senses dictate its completion.

Deepa accompanies the viewer in a journey of pure sensations without contaminating one’s mind with preconceived ideas. The observer becomes an active part of the profound essence of the painting: infinite possible interpretations in just one wonderful source of emotions.

Harmony and profound perspectives are her aims; layers and layers of emotional significance represented by the layers of textures, elaborate colour and shape, interactions that leave the viewer absolutely free to experience the paintings in the totality of their intrinsic sensational expressiveness, instead of on a singular or constricted aspect.

It is the way Deepa sees the world around her. She doesn’t see model objects, nor specific subjects. She sees beyond the palpable. She sees the dynamics, the underlying emotional significance and transposes it into a universal and abstract lexicon. These are perceived by the viewer’s senses as a stimulus to investigate our Jungian collective unconscious in order to interpret our instincts and archetypes and thus understand the two dimensions of reality: the ‘Everything’ and the ‘Nothing’, enriching our vision of the world around us.

Oil paint seems to crystallize on the surfaces, solidifying into a thousand dapples of ancient stones. Dense black touches and dots hatch and make their way through the burning bright hues or surround the cold shades of bluish tones, enhancing and reinforcing them or apparently defining hidden forms and subliminal ideas not yet visible.

The artist herself said: “My eyes seem to love the colour black inevitably which seems to find itself into almost all my paintings.” This irreversible attraction to black gives a veiled three-dimensionality and significance to the works. At a more in-depth analysis, every black vein becomes the structure, subject, engine and soul of the work.

Suddenly, the focal point of the work of art is overturned: the astonishing and sparkling strokes of tint, which a while ago enraptured and embraced the viewer’s eye, now appear as background, usurped by the unpredictable strength of simple signs of black.

Nonetheless the spots of white, that at the beginning appeared as a lack of hues, assume their own strong charisma and importance in the complexity of the work.
Sobti’s creations are not about pigments: they reveal the innermost essence of a meditative personality with an expressive power that penetrates our souls according to our ephemeral mood, and bring us some peace of mind. Definitely, her highly coloured style ensures an intimate relationship with the individual spectator.

In the extraordinary works of Sobti we see the same emphasis as in the most passionate paintings by Albert Kotin, one of the fathers of the early American Abstract Expressionism.

Even in Sobti’s creations we are enchanted by the juxtaposition between plain colour and vigorous gestural traces. Strongly focused on a spontaneous, automatic and subconscious creation, Sobti inputs all her strength in a mind-emptying combination of sensations that induces a pure contemplation in the viewer.

She conveys an emotional intensity that concerns the spiritual, the inner thoughts and the mind in its infinite intricacy.
Her paintings, albeit with no definite or explicit topics, become more and more genuine as well as focused in what is essential to her; to communicate all her passion, vitality and contemplative ardor throughout the application of marks on a flat surface.

We can perceive an underlying philosophy parallel to Mark Rothko and Barnett Newman, who, among others members of the New York school of Abstract Expressionism, described their desire to achieve the “sublime” rather than the “beautiful.” 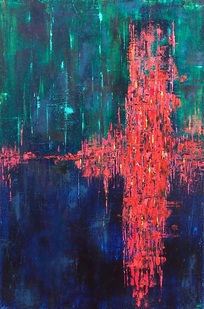 A beating heart, life, pure energy...
As blood flowing in her veins, Deepa’s palette-knife fluidly moves on the canvas, producing a stunning effect. The powerful contrasts between the cold atmosphere in the background and the intense carmine red drag the viewer into a world that floats between the supernatural and the human.

The peaceful and reflective layer of blue in the background creates an enigmatic atmosphere that makes us travel between a quiescent night sky and the most mysterious and deepest ocean.

Suddenly, the cold and calm blue ambience is pierced by the enthralling presence of the red pigment that withholds all the fervent passion Deepa is capable of, only to be transposed and transmitted to the viewer with all its powerful forcefulness. Delicate touches of yellow gleam on the surface, in a concert of perfect contrasts.

The chromatic clash is even more emphasized by the enigma that the artist presents us. Deepa’s paintings tell stories and we are forcefully catapulted into a dimension made of emotions in which we question the very meaning of art. But after all, her works are nothing but ancient creatures in which all our most primal emotions recognize themselves.

Body and soul, vital energy and abstract thinking, passion and spirituality: these are the true contrasts that make the work of Deepa a masterpiece of introspection.